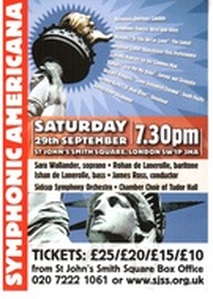 The Saatchi Gallery’s current Gesamtkunstwerk Exhibition is the inspiration for a new and innovative collaboration with The Purcell School and neighbouring Queenswood School. The Purcell School, one of the world's leading music institutions, has selected outstandingly talented young composers from five different countries to compose music inspired by the Exhibition's art works. They will be joined by five composition students from Queenswood School. The new music will be performed live at the Gallery next to the art works chosen by the composers on Wednesday 22 February at 7pm, following the Saatchi Sculpture at School Prize awards.

The students have had complete freedom on their choice of art work, and how to respond to it. They have been encouraged to go far beyond immediate notions of representation, and to produce music that may reflect, comment on or even react against the selected art works. The idea, pioneered by British conductor James Ross and former Saatchi Education Director Dyala Nusseibeh, is to bring the Gesamtkunstwerk concept full circle, returning it to music, and to show the limitless possibilities it could inspire.

James Ross comments: 'The composers have succeeded in taking radically different approaches to their chosen art works, in a huge range of styles and instrumental combinations. What unites them is how strongly the art works have stimulated the composers' imaginations. The Saatchi Gallery’s Gesamtkunstwerk Exhibition shows the rich and diverse range of contemporary German art; the composers' responses are an equally fascinating tribute to the creativity of today's leading young musicians.'

Acclaimed pianist James Willshire joins Sidcup Symphony Orchestra for Rachmaninov’s famous Rhapsody on a Theme of Paganini at their next concert Saturday 10 March, St John’s Church, Sidcup, DA14 6BX, at 7.30pm. James Willshire delighted the Sidcup audience with Rachmaninov’s Second Piano Concerto last year; the 10th March concert promises dazzling piano playing – and one of classical music’s most beautiful melodies.
The concert, conducted by SSO Music Director James Ross, starts in party mode with French composer Berlioz’s wild and thrilling Roman Carnival Overture, and also features Liadov’s The Enchanted Lake, a rarely played beautiful Russian miniature. The night culminates with Mussorgsky’s Pictures from an Exhibition: a tribute to a close artist friend who whose paintings are brought to life in music. Expect an evil gnome, a lumbering ox-cart, a saxophonist posing as a medieval balladeer, chicks dancing in their shells, ghoulish catacombs in which skulls light up, terrifying Russian witch Baba Yaga with suitably barbaric music, and finally the whole orchestra of over seventy musicians blazing out the majestic ‘Great Gate of Kiev’. Fans of an infamous fictitious politician from the 1980s played by Rik Mayall will recognise the opening trumpet tune immediately.
James Ross comments: ‘James Willshire made a huge impression on our audience and I’m delighted he’s returning to play with SSO again on 10th March. I’m also excited to be performing Mussorgsky’s Pictures: it’s packed with great solos for the Orchestra’s principal players from the tuba upwards: anyone who’s never heard a full symphony orchestra live before will be amazed by the range of sounds and moods this music creates.’